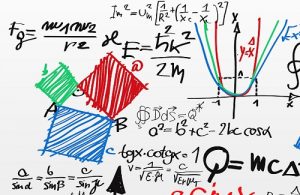 Gender and ICT has carried out abundant research on the influence of gender roles and stereotypes in girls’ and boys’ study choices and self-concepts of ability regarding STEM and non-STEM fields. Bellow you can find several infographics that summarize some of the key findings of our studies of the gender gap in academic motivations and self-concepts of ability. These studies have been fulfilled as part of diverse research projects funded by the Spanish Ministry of Economy and Competitiveness (see ESTEREO project) and by the Catalan Women’s Institute.

The infographics also include the qualitative conclusions of several educational wokshops with secondary education students curried out on December 2016 and January 2017, in the framework of a collaboration agreement settled by GenTIC with the Catalan Women’s Institute (ICD). In five workshops at a secondary school in Barcelona, we asked 2nd and 3rd year compulsory secondary school students which three subjects they thought girls were better at, and which three subjects boys were better at. A total of 96 students (47 girls and 49 boys) participated in the sessions and worked in mixed subgroups of between 3 and 5 people.

Although we explained to the students that the subjects chosen for boys and girls could coincide or not, the subjects stood out as those in which they thought girls and boys were more competent are different. The reasons why students argued that boys and girls excel in different subjects show the persistence of gender stereotypes that influence self-perception of abilities and the evaluation of occupations.

In addition to the results summary, we offer some proposals for educational intervention in order to address academic sexism and its influence in study and occupational choices. 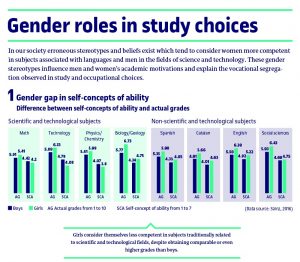 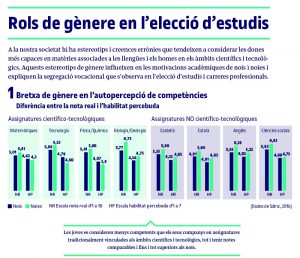 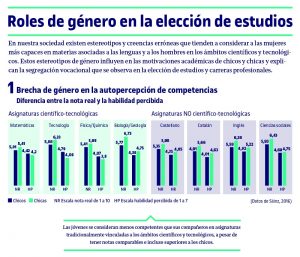 >> Back to Communication to stakeholders and wider society