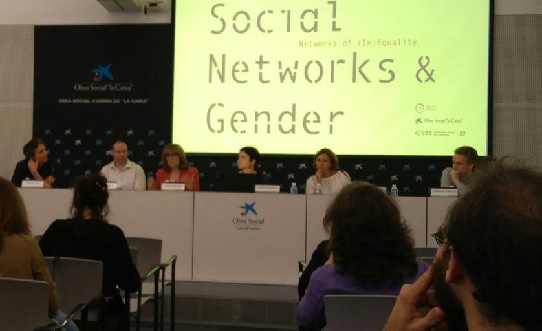 Gender and ICT organized a panel discussion on 28 October 2016 aimed to reflect on research ethics, privacy and social inequalities in relation to social networks. A selection of international experts participated in this public event and discussed the perils and advantages of the affluence of data that is ubiquitously spread and shared on the Internet. Knowledge access, data privacy, inequalities and power relations are all issues underlying Social Network Analysis, essential for our ethical concerns, which were tackled during the panel in the light of the existing research on the interface between social justice and social networks.

Steve McDonald, Associate Professor of Sociology at North Carolina State University (USA), pointed out some privacy concerns about the use of social media in the market labour. People use social networks in their job search, but might not be aware that companies are increasingly using Social Media in hiring processes and can take decisions on the information found in the Twitter and Facebook accounts of candidates.

Karyn Loscocco, Professor of Sociology at the University of Albany in upstate New York, reflected on the absence of formal rules in social media, which can derive in negative comments and criticism. In this sense, sexist implicit biases have negative effects on women in social media, as studies show that women are far more likely to be negatively targeted on Twitter than men. On the contrary, social media also provide new resources and possibilities for women in their personal or business purposes. Technology facilitates a global community of affinity and, at the same time, big data allow researchers to collect women’s and men’s multiple identities and capture the complexity of social life.

On her turn, Francesca Grippa from Northeastern University (USA), presented a project dedicated to analysing emotions, the use of language and gender on social media interactions. Among the conclusions, she highlighted that women tend to make more positive comments on social media platforms. Elisa Bellotti, member of the Mitchell Centre for Social Network Analysis, pointed out that big data are online and forever, and it is difficult to distinguish between the good and bad purposes it can be used for. Therefore, it is important that people are educated on the circulation of their personal data and its consequences.

Big data can provide us with information about social inequalities and discriminations that were not known before. Christian Steglich, from the University of Groningen and the Institute for Analytical Sociology (IAS, Linköping University), closed the session pointing at the inequalities that emerge when analysing social networks and segregating different variables. Gender biases in data collection can prevent from having complete and accurate information.