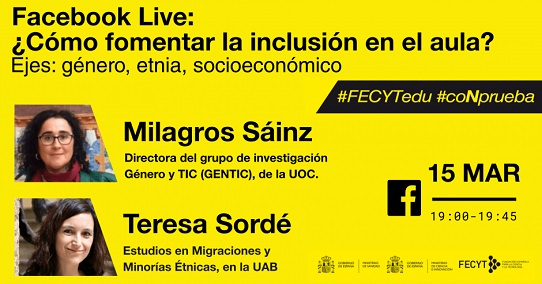 The director of GenTIC, Milagros Sáinz, has participated in an open debate organized by the Spanish Foundation for Science and Technology (FECYT) to tackle the gender, class or ethnic stereotypes that can affect the educational community and how to confront them in order to foster equality and inclusion in the classroom. The event was held on the FECYT Facebook channel on 15 March 2021 and included also the intervention of Teresa Sordé, a researcher at Universitat Autònoma de Barcelona and an expert on migration and ethnic minorities, as well as Ángela Monasor as a chair.

In her intervention, Milagros Sáinz pointed out the gender stereotypes that persist in education and stated how gender biases and academic sexism impact vocational segregation between girls and boys and motivate the gender gap in study choices. “Although there is no scientific evidence to support that women have lower math and technology skills than men, there are many gender-related stereotypes about the differentiated academic competencies and performance of boys and girls”, she affirmed.

Teresa Sordé, on the other hand, explained the ‘edumyths’ concept, which refers to erroneous assumptions that occur in educational practice and are not based on any scientific evidence. In that regard, Teresa Sordé highlighted diverse examples around the myths that provoke unequal and discriminatory treatment of the Romani people in Spain.

Before the debate, the FECYT blog #FECYTedu published two articles by Milagros Sáinz and Teresa Sordé in which they addressed the importance of challenging gender roles and stereotypes through teaching and how to promote equity by substituting ‘edumyths’ for practices guided by scientific evidence of social impact, respectively.

Watch the debate #FECYTedu #coNprueba on how to foster inclusion in the classroom on the Facebook page of FECYT at this link.