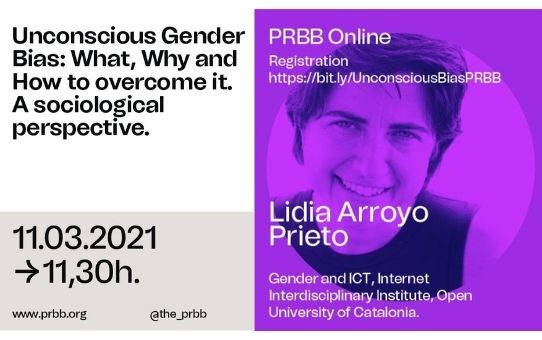 Lídia Arroyo, a researcher at the Gender and ICT research group, has given the invited conference “Unconscious Gender Bias: What, Why and How to overcome it. A sociological perspective” in the online seminar organised by the “Equality, Diversity and Inclusion Committee” of the Barcelona Biomedical Research Park (PRBB) to celebrate the International Women’s Day (8th March). The event took place on 11 March 2021 and was moderated by Maruxa Martínez-Campos, scientific editor and community manager at the PRBB.

In her talk, Lídia Arroyo offered a sociological and intersectional perspective about what unconscious gender bias is and how it works. The concept is useful to be aware of our own non-recognised biases. Lídia Arroyo revised the elements that configure gender biases and pointed at the interrelation of individual and social, structural factors. In that regard, gender bias is linked to cultural imaginaries and social practices, and the gendered social expectations related to the sexual division of labour have an important influence on its configuration. Nevertheless, the researcher stressed that despite being unconscious these biases are not unavoidable.

Lídia Arroyo analysed, on the other hand, existing gender bias in science and stressed the importance to integrate a gender dimension and use non-binary gender data as well as considering an intersectional perspective to produce scientific knowledge and innovation. “Not including a gender perspective in science is usually seen as a neutral approach but it is an androcentric approach”, she affirmed.

If you missed the seminar, you can watch the full conference in this video: