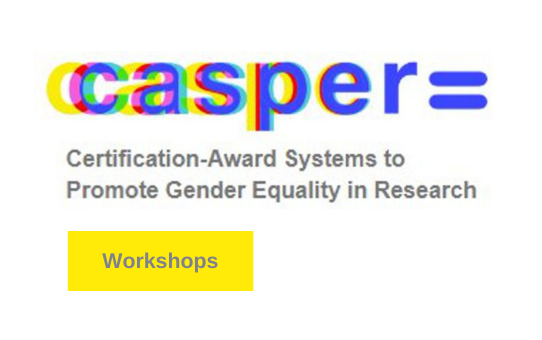 The CASPER project is organising a series of co-creation workshops with stakeholders in different regions of Europe to define the scenarios for a gender equality certification or award system at the EU level. The purpose of the workshops is to generate ideas and reflect on the feasibility of establishing a gender equality scheme for research organisations in Europe, as well as capturing the diversity of existing award/certification practices and differences in the adoption level of gender equality policies.

Overall, 10 online workshops will be held from the 12th of January until the 17th of February 2021. Each event comprises two sessions of 3 hours and is facilitated by members of the CASPER project Consortium. Gender and ICT, together with Yellow Window, is facilitating the workshops on 14-15 January and 28-29 January 2021 with key stakeholders and experts in research certification, gender equality and R&I systems based in Spain, Portugal and France.

Check out the #CASPERWorkshops agenda and register to participate at this link.