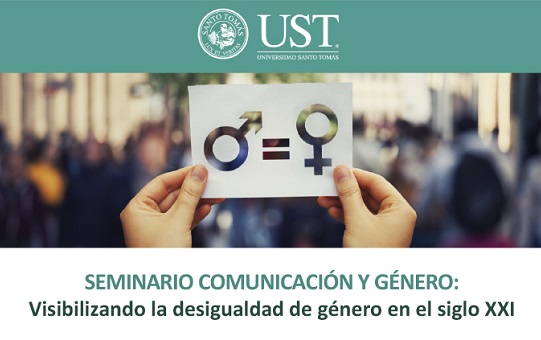 GenTIC researcher Lidia Arroyo has offered an invited lecture at the seminar Communication and Gender: Making Gender Inequality Visible in the 21st Century, organized by the Universidad Santo Tomás de Santiago, in Chile. The event took place on November 18, aimed at students, academics, media communicators and the general public in order to offer tools for analysis and reflection on gender equality in the use of communication technologies.

In a communication titled “Digital gaps and gender inequalities in the face of the COVID-19 pandemic hurricane”, Lidia Arroyo emphasized that the pandemic has shown existing gender inequalities, in which cultural and symbolic inequalities intersect with material and economic conditions. “The pandemic context has highlighted the sexual division of labor and the digital divides”, she affirmed. The researcher presented available data showing that women have increased the time devoted to unpaid care and domestic work during the pandemic and have reduced their work contracts or have left their jobs to a greater extent than men.

In relation to digital gaps, Lidia Arroyo explained the consequences of gender inequalities regarding the uses of time, and stressed that the lack of participation of women in the design of technologies and in the use of new digital platforms involves important androcentric biases. On the other hand, Lidia Arroyo analyzed the dynamics of teleworking and its implications. The researcher underlined that labor flexibilization has benefits regarding workers’ autonomy but has increased precariousness. Teleworking also involves risks and imbalances associated with workers’ invisibility, isolation, and difficulties to separate work and personal life, which are related to gender inequalities.

Besides Lidia Arroyo, the seminar included presentations by speakers Fernando Mora Aspe, president and member of the gender committee of the association of publicists ANDA Chile, and Daniela Catalán, art director at BBDO Chile and creator of #Silenciadas, a campaign aimed at addressing gender violence and femicides in Chile.

Watch the full recording of the Seminar Communication and Gender on the Teams platform in this link.