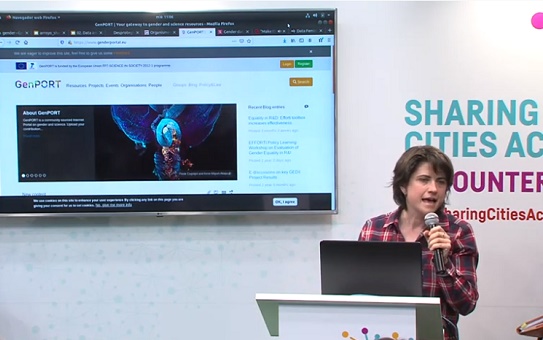 GenTIC researcher Lidia Arroyo participated on November, 20 in the open forum “Data and Gender: the importance of Data with gender perspective in Public Policies” that was organised by the Barcelona City Council, Barcelona Activa and research group Dimmons of the Internet Interdisciplinary Institute (IN3-UOC) within the Sharing Cities Action Encounter 2019. The open session took place at the Sharing Cities Stand Lab, the main venue for talks, round tables and lightning sessions during the event, and aimed at addressing the gender data gap in relation to the design, monitoring and evaluation of public policies.

A panel of gender data experts presented several projects as examples of good practices in the use of data with a gender perspective. Lidia Arroyo focused her communication on GenPORT, an open and collaborative internet portal on gender and science resources with more than seven hundred registered users, which is currently linked to the Horizon 2020 project ACT regarding community building and practice sharing. On the other hand, Lidia Arroyo highlighted the importance to publish gender data in the fields of science and engineering in order to guarantee correctly interpreted and non-biased results, facilitate data reproducibility and open new knowledge perspectives and research questions.

Eli Vivas introduced StoryData, a journalists’ organisation specialised in data dissemination that has carried out several projects with a gender perspective. Catherine D’Ignazio (MIT and Emerson College) synthesized her forthcoming publication Data Feminism, a book that looks across the last decades of feminist activist and theory in order to contribute to a critical and ethical orientation of nowadays data science.

Karma Peiró presented “Desprotegides”, a web documentary project based on investigative journalism about violence against women in Catalonia. The site compiles public data and interviews on gender violence and displays them interactively through videos, photographs, graphics, maps and text. The General Director of Transparency and Open Data of the Government of Catalonia, Núria Espuny, detailed the Catalan government strategy defined to make open access all public data that is not restricted by confidentiality requirements or other legal reasons.

To conclude, Valentina Bazzarin described the initiatives developed by the non-profit organisation Associazione Orlando to create an advocacy campaign in the city of Bologna in order to urge local public institutions to publish data integrating a gender perspective.

Watch out the full session in the video below and access the collaborative notes and other resources in this link.

Gender and ICT is a research group at the