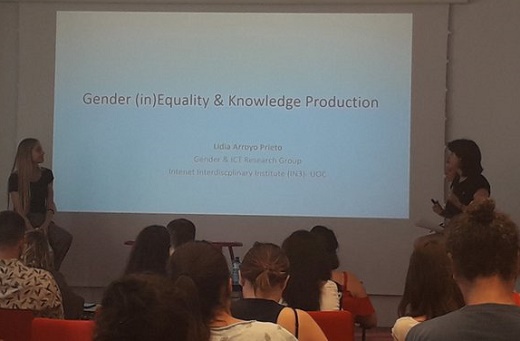 Lidia Arroyo, researcher at GenTIC, has participated at the Round Table “Gender perspective in science”, co-organized by the Catalan Association of Scientific Communication and BSM-UPF on the 1st of July. The table was part of the event “Scientific journalism to confront fake news and disinformation”, held in Barcelona as a satellite activity of the World Conference of Science Journalists 2019 that took place in Lausanne from 1 to 5 July.

This satellite event created a space for science journalists to reflect on the Fake News phenomenon, analyse how false reports work in society and discuss the best tools to confront disinformation.

At the round table “Gender perspective in science”, Lidia Arroyo pointed out the existing gender inequalities in knowledge production and how stereotypes about women and men’s roles as well as a lack of gender perspective at scientific institutions generate labour inequalities and important biases in knowledge. On the other hand, Lidia Arroyo reflected on the usual tendency to consider that rigorous science refer only to disciplines tied to the scientific method, such as natural or physical sciences, and exclude social sciences. Lidia Arroyo remarked that social sciences are also based on rigorous methodologies and robust theoretical frameworks, and highlighted the need to focus attention to the relevant contributions of female social scientists.

On her side, Cristina Sáez, science journalist, analysed the example of a real image of a woman engineer spread by an engineers’ platform that was perceived as ‘fake’ by the public. Finally, Alba Noguera Carol, researcher and secondary education teacher, and Gemma Rius, postdoctoral researcher at IMB-CNM-CSIC, tackled the underrepresentation of women in scientific and technological studies and sexism in scientific institutions.

Gender and ICT is a research group at the