Milagros Sáinz, director of Gender and ICT, presented last week the results of her recent research on the development of science, math, and language interests among secondary school students in the International Conference on Motivation 2016, held on Thessaloniki (Greece) on 24-27 August. The study was carried out together with Katja Upadyaya and Katariina Salmelo-Aro, and focused on a comparative analysis of the development of sciences and language interest among Spanish and Finnish secondary students across their transition into high school.

A total of 424 Spanish and 871 Finnish students participated in the study, which considered the co-development of science, math, and language interests taking into account the role of gender, performance, and socio-economic status. The results for the Spanish sample showed that interest in each domain slightly decreased over time. However, Finnish students experienced a high initial level of math/science and language interest, which remained relatively stable across time. Further, in both countries positive associations between language and science interest were found. Similarly, in both countries boys showed higher interest in math and science, whereas girls reported higher interest in language. 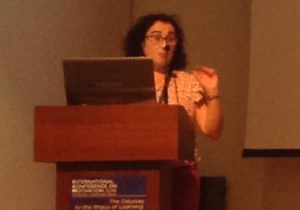 With regard to the socio-economic status, Spanish students from higher status families showed bigger initial interest in science. Moreover, in the Spanish sample, students with high math performance showed a lower decrease in their interest in math than in Spanish. Nevertheless, a high performance in science predicted a lower decrease in students’ interest in both science and Spanish. Finally, in the Finnish sample students with high grades reported a bigger initial interest on math/science and languate, which, however, slightly decreased later on.

The theoretical and practical implications of both studies were discussed in light of the expectancy-value theory of achievement motivation. In the conclusions, Milagros Sáinz highlighted the need to develop further research on the way students form intra-individual hierarchies of interest, as well as more empirical studies on the perceived costs associated with the co-development of interest in different subject areas.