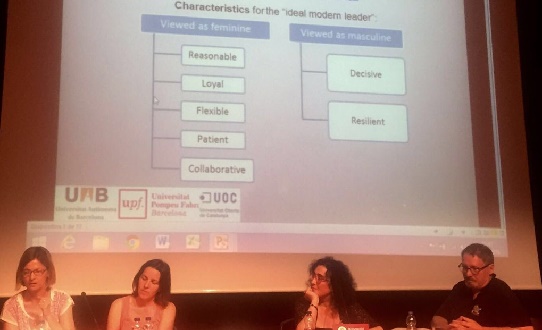 Why there is an underrepresentation of women in STEM? What are the ethical implications of this lack of participation and how can we overcome the situation? These and other questions related to women’s low share in scientific and technological studies and occupations were discussed during a seminar organized by Gender and ICT on 7th July. The event was held in the Espai Francesca Bonnemaison (Barcelona) as part of the project “Challenges to the persistence of gender roles and stereotypes in the choice of higher education studies from a longitudinal approach. The role of families and teachers” (FEM2014-55096-R) funded by the Spanish Ministry of Economy and Competitiveness.

Marta Aymerich, Vicerector for Strategic Planning & Research at the Universitat Oberta de Catalunya (UOC), started the session with an opening speech that highlighted the existing evidence on the unequal consideration of women’s academic careers in relation to men and stressed the need to explore the reasons why women are less valued in order to prevent academic sexism. In her turn, Ana Puy, director of the Women and Science Unit of the Spanish Ministry of Economy and Competitiveness, explained the measures that are being implemented from the Spanish public policies to tackle the gender gap in STEM studies and occupations. 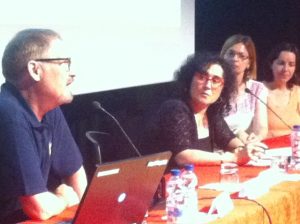 Milagros Sáinz, director of Gender and ICT and chair of the session, focused on the vocational segregation in secondary education. She offered some data about the fact that girls continue less interested in STEM subjects, while boys continue thinking that mathematics and sciences are more useful for what they would like to do in the future.

Campbell Leaper, Professor and Department Chair of Psychology from the University of California, Santa Cruz, presented an in-depth review of the combination of individual and socio-cultural factors that undermine women’s sense of belonging to STEM. He stressed that the values reinforced in many girls’ and women’s peer groups may conflict with their perceptions of STEM. In addition, girls and women may experience rejection and hostility from others regarding their achievement in STEM fields. In closing, he highlighted some strategies for reducing sexism and fostering STEM belonging, such as making students aware of gender biases and discrimination and encouraging collaborative mixed-gender groups.

This seminar was organized by the Gender and ICT research group with the support of the project ESTEREO (“Challenges to the persistence of gender roles and stereotypes in the choice of higher education studies from a longitudinal approach. The role of families and teachers”, FEM2014-55096-R, Principal Investigator: Milagros Sáinz), funded by the Spanish Ministry of Economy and Competitiveness.